Many local 'harbour committees' have been set up to modify and develop the waterfront of Bay de Verde. Except for some small projects, local committees were just not suited for the kind of harbour development needed in the new fishery now being conducted.

By the early 1990's, the Small Crafts and Harbours division of the Department of Fisheries and Oceans Canada stated categorically that no financing would be allocated to harbours that did not have a Harbour Authority. Consequently, in 1996 a public meeting was called at Bay de Verde and at long last a Harbour Authority was elected.

'Bay de Verds is a wild fishing cove, open to the sea, very small and dangerous.' This statement very aptly described the harbour at Bay de Verde. Also referred to as Foreside, it was not much of a safe haven for its fishermen. Strong and devastating southerly and south-west winds often destroyed large and small vessels as well as fishing premises.

In 1945, after constant requests by residents, the Newfoundland Commission of Government finally allocated $220,000 for construction of a 500 foot long breakwater to extend north-west from Emberley’s Point. The announcement was made on April 18, 1945 and construction began in mid-June with the breakwater being completed in mid-January of 1946. However, just a week later, a severe storm did immense damage, cutting a large gap in the structure and carrying away much of the heavy stone. Repairs were made in the spring but the unrelenting seas caused more gaps to appear shortly afterwards.

In 1951, the federal Government of Canada provided funding for repair and reconstruction. Later in 1958, it was raised to its present height and substantially widened. In 1965, a 120 foot long by 30 foot wide seaward cribbing as well as a concrete wing-wall was constructed at the end of the breakwater. Later in 1978, large armour stone were placed outside this cribbing. In 1989, another 100 foot extension was put onto this cribbing and filled with rock and concrete. The last cribbing was placed there in 1999, finally making the harbour significantly safer. 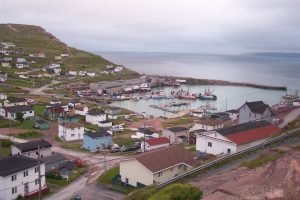 In due course, the Authority hired an employee to do all necessary work on the waterfront. They also acquired land from the town council to erect a Harbour Authority Building. At last, after over four hundred years of use Bay de Verde had a viable way to plan and implement improvements to one of its most valuable asset, the waterfront.

The first project was the construction of a new wharf built next to the launchway in the north-east part of the harbour to be used exclusively by the smaller boats. The final plan to make Bay de Verde Harbour more secure was a joint project of the newly formed Harbour Authority and the Small Crafts and Harbours division of DFO. In 2001, a new dock along the north side of the harbour was constructed. The following year another breakwater was constructed from the tip of Blundon’s Point extending in a southerly direction to intercept just inside the existing one. This project has allowed for the placement of floating wharves on the north side providing secure tie-up facilities for all of the smaller boats as well as giving adequate room for the manipulation of the larger boats on the south side.

Over the last number of years, the Bay de Verde Harbour Authority has been successful in obtaining funding of millions of dollars to implement vast improvements to the waterfront. Today Bay de Verde Harbour, although not a completely safe harbour, is a far cry from the ‘wild fishing cove’ described by Captain Berry.